We created a number of quizzes that were played during the entire schoolyear at school. We used the mentimeter.com site to create the online games, students used their mobile phones to participate. There were a total number of 4 rounds, the purpose of the quizzes was surveying how much students know of and what feelings or impressions they have about the European Union. Each class had their session on a different day, in the morning before their classes started and feedback was given to them on the correct answers. A total number of around 600 students participated in the game. At the end of the schoolyear a final quiz was celebrated in the main hall of the school where each class could delegate a maximum number of three teams made up of three students each. All the quizzes in pdf and the results in excel format are available on the school’s website. Posters containing some pieces of information were created beforehand and distributed in the building in order to call the students’ attention to the event. 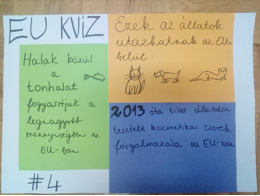 At the conference in Salamanca, March 2018 we also presented an abridged version of the quiz that the international Erasmus+ students could see and try out and had a very positive feedback on the game. The results are stored in excel files and the quiz itself can be reached on the menti.com site under the game pin 36 33 45.

As a final product for the two years project carried out at AKG the ERASMUS+ students created a board game concentrating on debate and role play. One of the main focuses of the game is being able to empathise and feel for people with different social backgrounds and nationalities and give an opinion about several topics. The other objective of the game is to practice arguing, debating in English about a given topic. Each student is assigned a role accidentally and it is decided for them whether they should support or argue against a statement (topic sentence). Examples for topic sentences are: “Kids should get compulsory education until they’re 18.” or „Gay marriage should be legal around the world”

Examples for role descriptions are: „Spanish high school teacher from a little village” or „A big company’s CEO who uses animals to test products”

We created a padlet site that was shared by all the student members participating in the project and all of us read and uploaded articles and relevant material (online news articles, video links) to this site. We read the articles and shared our view and opinion about them. https://padlet.com/anett_zebra/e126fqelckqn

A group of students and one of the project teachers attended an interactive theatre performance created by the „Mentőcsónak Egység” and „FÜGE” theatre groups and the Hungarian Helsinki Committee that is titled „Menekülj okosan (Migrate wisely), Migraction”. After the performance, we had a session to discuss our experiences and impressions. The interactive performance had a great impact on the students so that some ideas and thoughts for the situations and roles for the boardgame were born due to the inspiration of the performance.

The debating society is an ideal tool for the discussion of important topics among students. We have a course in our school that works with debating techniques and methods 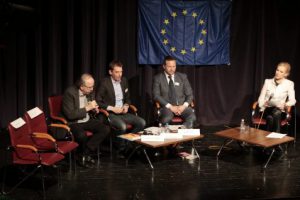 On the 23rd March 2018 a talk with Hungarian representatives of the European Parliament was held in AKG. Representatives of all the parties present at the EP were invited but unfortunately two politicians cancelled their participation just one day before the actual event took place. However, the other three members, Mr. István Ujhelyi, Mr. Péter Niedermüller and Mr. Benedek Jávor were present at the talk and they actively represented their views on European issues, such as environment, education, youth policy, etc. 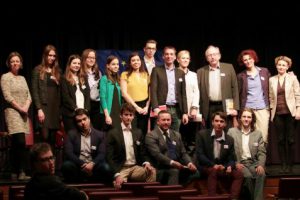 The focus of the session was not to discuss national political issues, but to concentrate on the European level. Students had prepared and sent their questions to all the invited politicians weeks before the event and they were also invited to improvise question on site. The event was open to all secondary school students but they were asked to register online. The event had its own facebook site and was organised in cooperation with the European Parliament Ambassador School workshop at AKG. There was a high interest on the audience’s part towards the talk but when it turned out that not all the invited politicians would be present many registered participants cancelled their registration, which meant that in the end there were approximately 250 persons present at the session.

This website uses cookies to improve your experience while you navigate through the website. Out of these cookies, the cookies that are categorized as necessary are stored on your browser as they are essential for the working of basic functionalities of the website. We also use third-party cookies that help us analyze and understand how you use this website. These cookies will be stored in your browser only with your consent. You also have the option to opt-out of these cookies. But opting out of some of these cookies may have an effect on your browsing experience.
Necessary Always Enabled
Necessary cookies are absolutely essential for the website to function properly. This category only includes cookies that ensures basic functionalities and security features of the website. These cookies do not store any personal information.
Non-necessary
Any cookies that may not be particularly necessary for the website to function and is used specifically to collect user personal data via analytics, ads, other embedded contents are termed as non-necessary cookies. It is mandatory to procure user consent prior to running these cookies on your website.
SAVE & ACCEPT